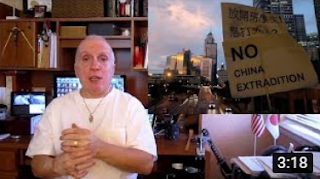 Link to above video:
https://www.youtube.com/watch?v=Xu3QNqj85DM

Prior to the G20  (Group of Twenty) meeting in Osaka, Japan, the commie thugs in Commie-land China warned the G20 nations they better not bring up the subject of Hong Kong.

Posted by Tony aka: PropagandaBuster at 1:10 PM