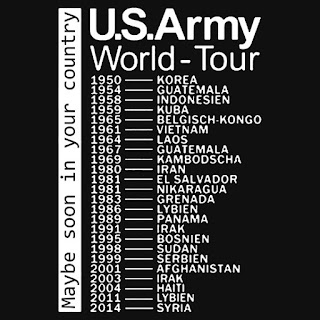 The inference being the United States is a belligerent nation and soon your country may be on that list.  A good reply is as follows:
Nice list.  Now can you show which country on that list the United States Army was there to conquer territory?  The United States went to each country to either protect freedom or the security of the USA or the security of an ally.  Please forgive the U.S. Army (and all of the U.S. military) for being the ONLY military force in the world able and willing to travel anywhere to protect freedom.

America does not send the military to other nations for territorial gain, other than a small plot of land to bury fallen Americans.  The American flag is seen by many either as a protector, or providing relief, while it brings fear to belligerents.

Link to Texas Daddy store:
http://texas-daddy.shop-pro.jp/
Posted by Tony aka: PropagandaBuster at 6:46 PM

The fight now (and mainly in the last half of century) it's not for land but for resources, my dear...
Do some investigations by yourself.
Peace!