Criminal Cosplay Watson has activated his disposable minion to protect dolphins.  Have no dear dolphins, you will be saved, or is that exploited? 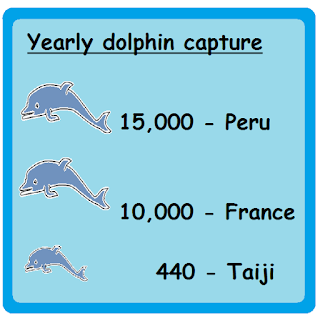 Sea Shepherd Global reports in French waters around 10,000 are slaughtered each year, which is illegal in France

The fishermen of Taiji, Japan plan to capture around 440 dolphins thisseason, which is legal in Japan.  Some of the dolphins are shipped live to marinas around the world.  The remaining dolphins are then used for food and food byproducts.

Further proof these foreigners who go to Taiji to document the dolphin activity are cowards and hate Japan / the Japanese.  They know if they go to Peru or Fance and behave there as they do in Taiji, they will get more than their feelings hurt.

Plus going to Peru or Fance there is no money in it for them.  While in Taiji the cowards broadcast hateful commentary both on live-stream and their Facebook page causing suckers around the globe to donate.  Many donate to masquerade their hate for Japan / the Japanese by hiding their compassion for the dolphins.  If they have such a high level of compassion for the dolphins, then how come they do not demand their “Guardians” go where 15,000 dolphins are illegally being slaughtered as oppose to being where 440 dolphins are legally captured?

Articles related to the dolphin slaughter in Peru: