This is the forty-first year the Angouleme International Comics Festival was held in a town around two-hundred miles south of Paris, in Angouleme, France.  South Koreans have participated in the Festival for the past ten years cultivating a warm relationship with the organizers.  The cultivated friendship seems to have resulted in dividends cashed in this year by the South Koreans.  This year the South Korean contribution to the Festival included magna exhibit bashing Japan over the Comfort Women issue.  The Japan bashing was masqueraded as an attempt to raise the plight of women as victims during war, this year being the one-hundredth anniversary of the start of World War One.

In response to this one-sided view of history a group of Japanese citizens and one Texans reserved a
booth at the Festival, traveled to Angouleme, France to present magna offering another version on the issue.

A day before the opening of the event, the Japanese / Texan set up the Japanese magna booth.  After completion the group left for lunch.  Unbeknownst to the team while at lunch the provocateur arrived at the booth and did the nasty.  Sacredieu!  The provocateur being the gentleman from the Festival organization responsible for the Asian section.

Here are the events as they developed:

As the booth was being prepared a member of the events organization stopped by the booth read the banners, and suggested perhaps the wording should be changed or deleted.  Here is the wording on two banners thought to have been the irritants:


Another point of contention may have been a displayed panel illustrating a man giving the Nazi “Sieg Heil” with a swastika in the background.  This was illustrating Hitler’s propaganda minister Joseph Goebbels promotion of telling a lie enough times it becomes the truth.  This in reference to the South Korean claim Comfort Women were forced into sexual slavery.

Understand at this point in the adventure no contact was made by the event organizers requesting or demanding the banners be removed.  Instead the nasty deed of removing the banners was done while the group left for lunch, much like cockroaches working at night while the humans are asleep.  Did the provocateur purposely wait for the booth to be empty to steal the items?  Uh Huh Huh!

When the provocateur was asked if the South Korean exhibit bashing Japan was political, he replied without hesitation, “no, because it is historic fact.”   Oui, oui!  To this provocateur the South Korean exhibit with one panel illustrated a Japanese World War Two era fighter, a Zero, flying while dropping women in the form of bombs.  Did the Japanese actually drop women from fighter planes?  So to France pure fiction is fact?  Not even Marshal Philippe Pétain would have fallen for that.

The Japanese booth was in violation of French law which prohibits denial of history.  The lawyer presented a copy of the law written in English and it did in fact read denying an historical fact was a violation of French law.  Since the South Korean exhibit illustrating women dropped as bombs from a Japanese fighter plane was labeled as historical fact, then the French must believe it did happen as illustrated.  Perhaps “Grimms' Fairy Tales” was French instead of German.

Who in France decides what is historical fact?  Is there an Academy of Historical Fact?  Perhaps a Ministry of History?  The law was enacted to prevent extremism.  Basically an extremist law was passed to prevent extremism.  That is equivalent to throwing water at someone drowning to save that person.  It was obvious free speech, freedom of expression in France are not as cherished as in many democratic republics around the globe.

To offer an alternate view on an historical event is a violation of the law in the French Republic according to the law as explained.  The French motto consists of three words:

Three officials from the Japanese Embassy in Paris traveled to Angouleme attempting to resolve the situation.  Their efforts met with stiff resistance from the French, and nothing positive resulted.

At the town’s city hall was a press room.  When a member of the Japanese press attempted to enter, he was blocked by a security guard and asked, “Are you Japanese.” The reporter replied yes, and the guard prohibited him from entering.  Then the guard made a telephone call and got clearance to permit the Japanese reporter in the Press room.  It should be noted the reporter was wearing his press credential as issued by the Festival committee a few days earlier.  It was not as if the guard asked if he was part of the banned Japanese group clearly demonstrating any Japanese was banned.


At this point it was evident of a clear anti-Japan bias by the Festival organizers, if not the town officials who were aware of the situation and made no known attempt to intervene.

It would be easy to assign blame for the repugnant French behavior in Angouleme with the South Koreans, but sole responsibility lies squarely with the French officials.  Sure it reeked with South Korean motivation and a culmination of a clever insidious plan by the South Koreans.  However the ultimate decision was with the French in Angouleme and they decided to act by allowing an exhibit to bash Japan while denying Japan the opportunity to defend itself.  Vive La France?

YouTube videos of the confrontation with the Festival organizer:
http://www.youtube.com/watch?v=fiw3eMQD7ms

Wikipedia entry on the festival:
http://en.wikipedia.org/wiki/Angoul%C3%AAme_International_Comics_Festival 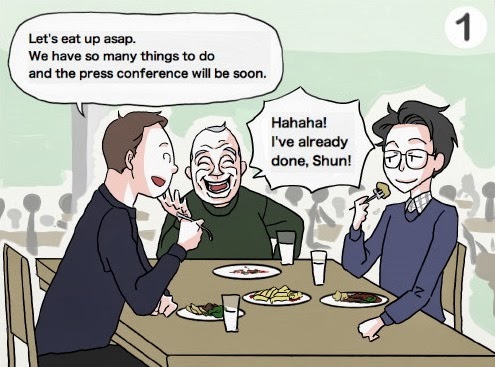 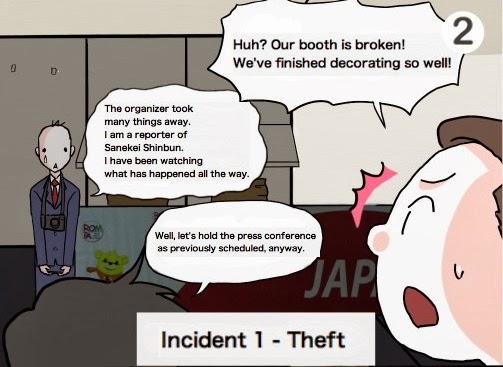 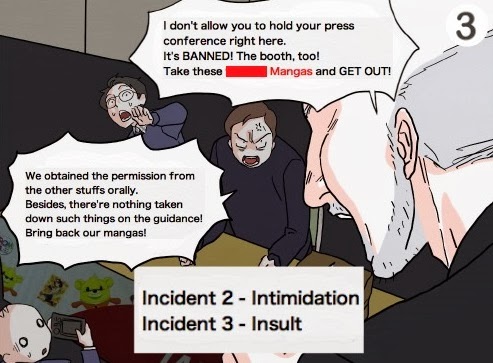 Posted by Tony aka: PropagandaBuster at 7:26 PM

Mr.Tony Marano.
It was a great job.
Japanese government was also referred to this incident.

The incident of "The International Comic Festival in Angouleme France,".
It has been turned into a big international issues very.
Kishida, Minister for Foreign Affairs conference(January 31, 2014) 05:17～
http://youtu.be/ek1FkfWIrnk

Could you supply a link for your claim that "Incidentally a U.S. Army 1944 report makes the same evaluation, “well-paid prostitutes.”
Does that include the Dutch Prisoners-of-war, including teenagers, who were forced to become 'comfort women'? (http://www.awf.or.jp/e1/netherlands.html)

The comfort women issue is a biggest hoax. For the past 20 odd years since the comfort women became a controversy, not even one family has come forward and said their daughter/sister was forced into sex slavery by the Japanese military. Not a single police report was submitted during the war although Korea claims 200,000 women were abducted by the Jse military. There was no riot then, and 800,000 Korean men tried to enlist int the Japanese military. The Korean government directly ran comfort stations during the Korean War...The Korean lies and hypocrisy are sicking.

US Army 1944 report reports about only Korean women who worked in a comfort station in Berma.