Japan and China, the people demonstrate

The Senkaku Islands are today uninhabited in the East China Sea part of the Ryukyu Islands.
Located between Taiwan, China, and Japan (Okinawa). This group of islands are disputed as to their sovereignty between the three nations. Recently a Chinese fishing vessel (Minjinyu 5179) was in the area of islands when it rammed two Japanese patrol boats.

The captain of the Chinese fishing vessel, Captain Zhan Qixiong was taken into Japanese custody for further questioning. Later he was released, however tension between the two nations continued to escalate.

The Tokyo demonstration was an event planned and carried out by the people as is the case in many democracies. While in China the students had to get the approval of the commies in Beijing if not initiated by their communist party government. Proof? Try to walk in Tiananmen Square (Beijing, China) and waive a Tibetan flag and see how long before you are pounced upon by the commie authorities. 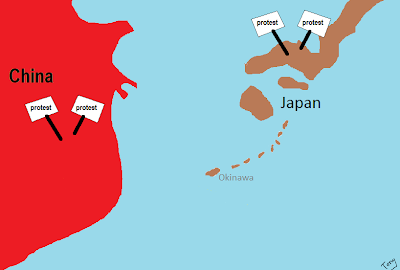 August 28, 2010 in Washington, DC, USA, there was a rally of about 500,000 to express conservative views, and it too was virtually ignored by the American news media which is also dominated by leftist and communist sympathizers. However in the USA we have conservative talk radio on AM radio stations to offer an opposing view of the news.

Please in Japan express a desire to protest in front of news stations concerning their left leaning bias in reporting the news. Why? These news outlets care not the people think. Their mission is to propagandize the news. Want to effect change? Hit them where it hurts, their money. Demonstrate in from of those business who advertise on those news networks with a leftist bias. The news networks care very much what their advertisers think.

My book,
“The Speeches of Texas Daddy”
Available at the iTunes store
Posted by Tony aka: PropagandaBuster at 8:09 AM