War drums on the Korean peninsula coming from north of the 38th parallel, The Hermit Kingdom, the commie regime of North Korea, DPRK (Democratic People’s Republic of Korea).  Their Supreme Leader Kim Jong-un or Kim Jong-unnecessary seems to be threatening anyone who would listen to him. 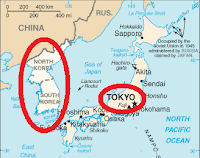 
Japan is minding its own business in the war of words coming from the commies, and yet Japan is target number one.  To the commies when any goes wrong for them, blame Japan, then the USA and South Korea.  They seem to blame Japan for their ills as Sea Shepherd’s “pope Paul the Watson” (fugitive Paul Watson) blames Japan for all his ills.  North Korea and Sea Shepherd share a common scapegoat to blame and that is Japan. 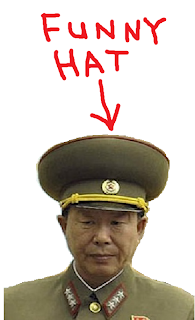 
Excellent article of possible retaliation towards North Korea is the lunatics behave like lunatics:
http://www.washingtontimes.com/news/2013/apr/4/us-would-seek-regime-change-north-korea-if-attack-/


Article on the situation with the commies in North Korea:
http://www.heraldsun.com.au/news/world/north-korea-gives-final-approval-for-nuclear-attack-on-united-states/story-fnd134gw-1226612136732


NOTE:  The video at the end of the Japanese flag (Nisshoki) from a Hanshin Tigers baseball game in Osaka, Japan, Hanshin Koshien Stadium, videoed April, 2012.
Posted by Tony aka: PropagandaBuster at 3:59 PM